YAMAHA was the first of the 4 Japanese builder who propose valves at the exhaust on a 2 stroke road bike. This system was develloped during the '80 season competition of Kenny ROBERTS on his TZ500.
Later the other 2 stroke Japanese sport bikes sold with a system at the exhaust were:

These devices wich is an electronically controlled variable-height exhaust port increase power & torque at low RPM to have an more useful power of the engine.

A pair of cables link the servomotor to the left end of the interconnected "power" valves. The CDI unit pilot the servomotor according to the RPM of the engine.
Below 6000 RPM, the valve is closed like on the above scheme (exhaust diagramm of 180 degres for the '83 to '85 models). At 6000 RPM, the valve start to rotate and opens the exhaust port to be totaly open at 8000 RPM (for '83 to '85 models, so an exhaust diagramm of 200 degres). 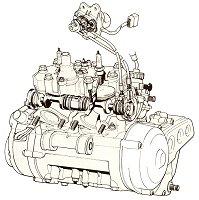